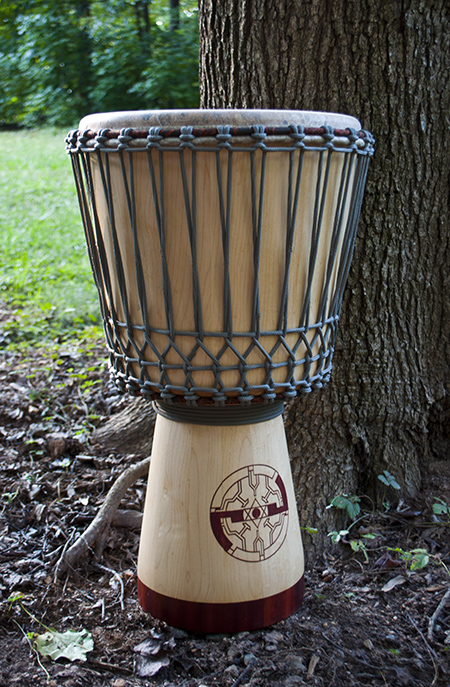 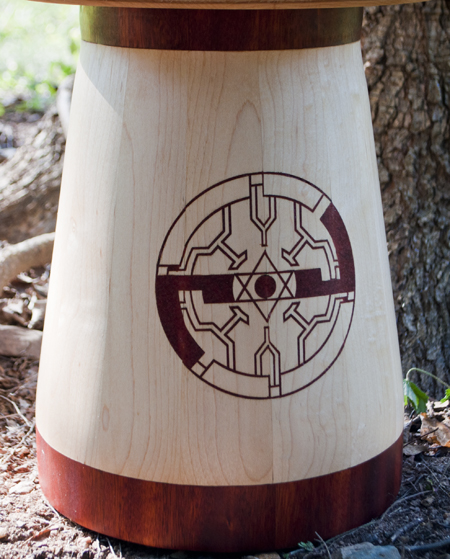 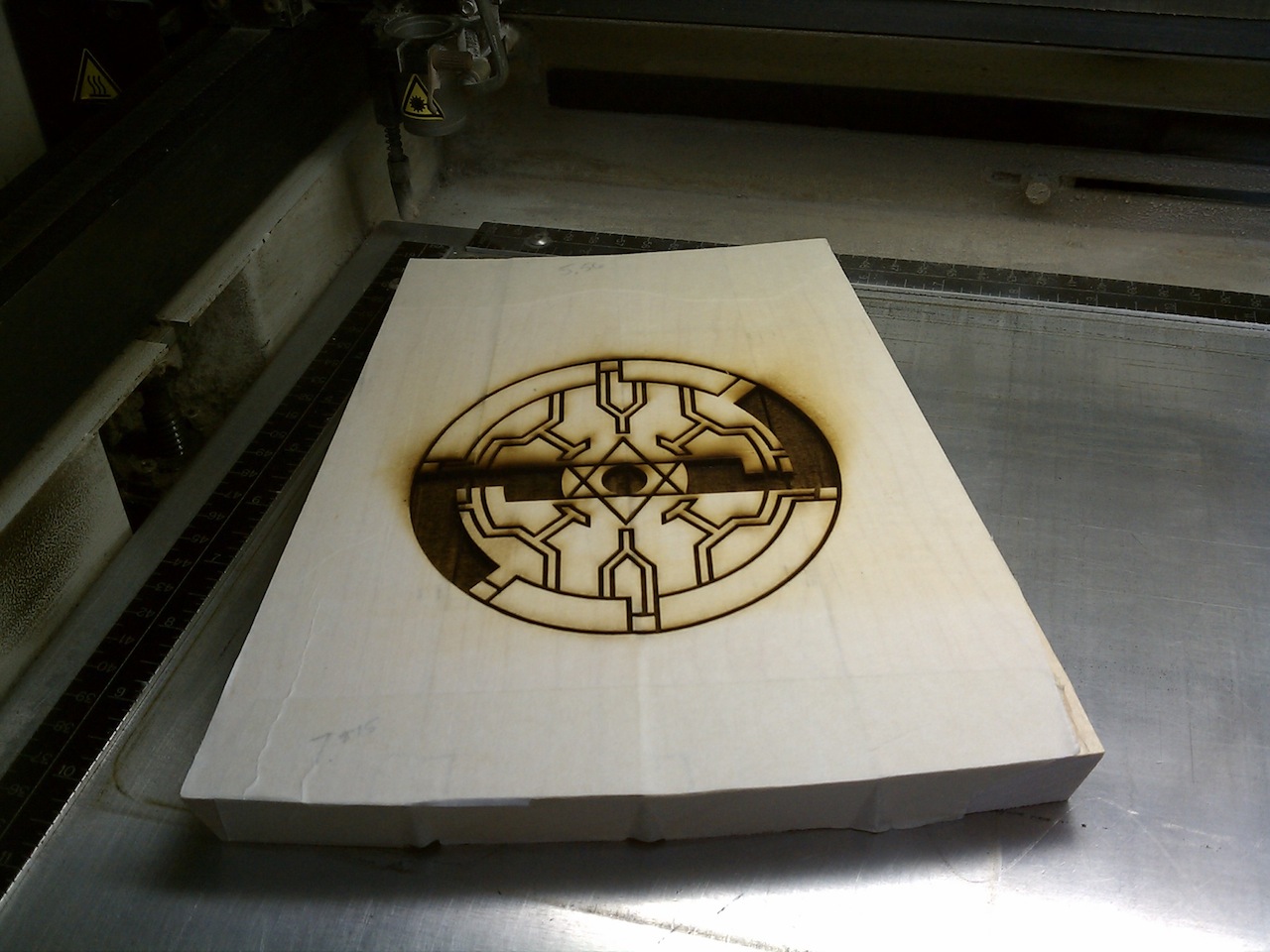 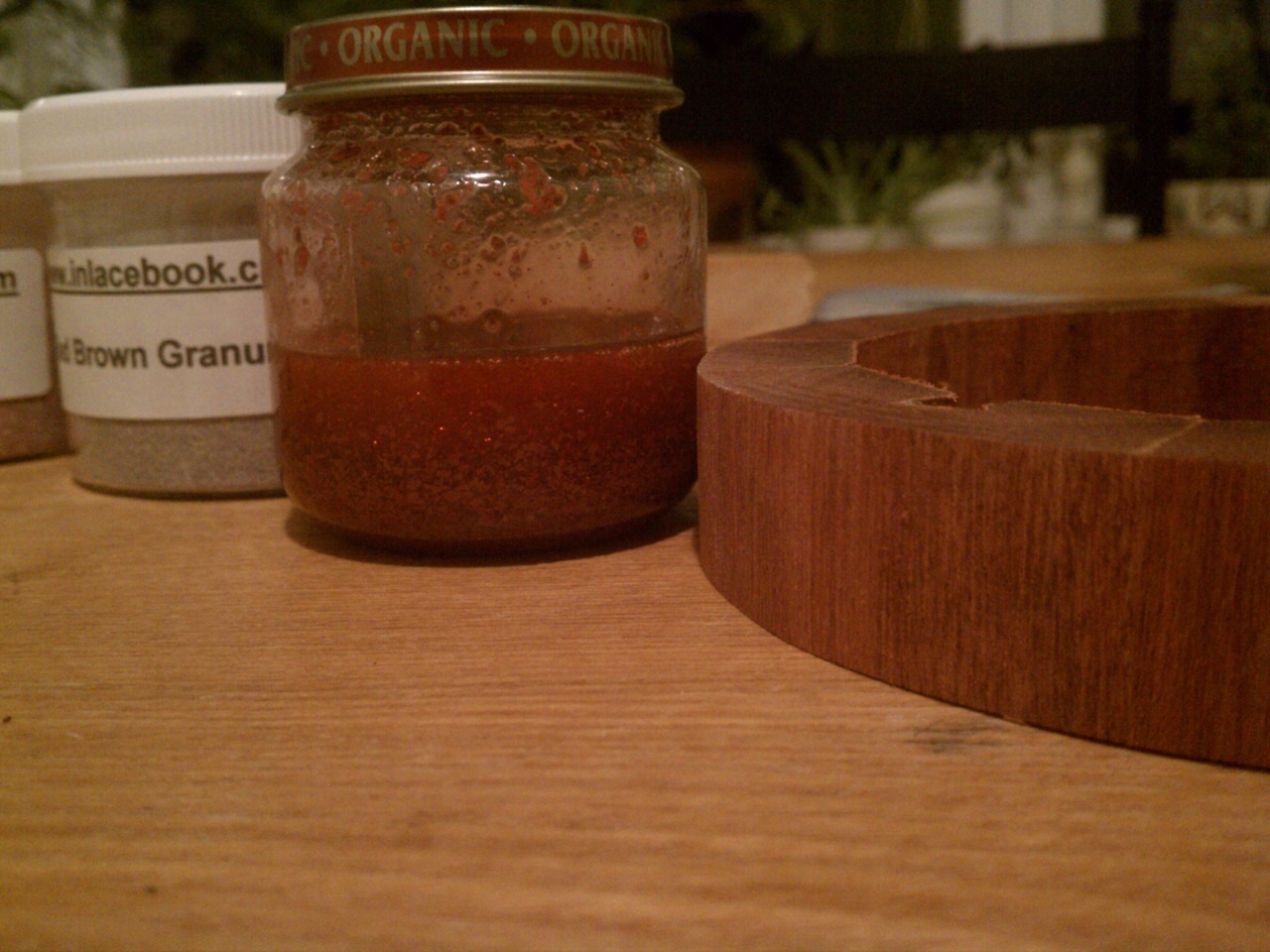 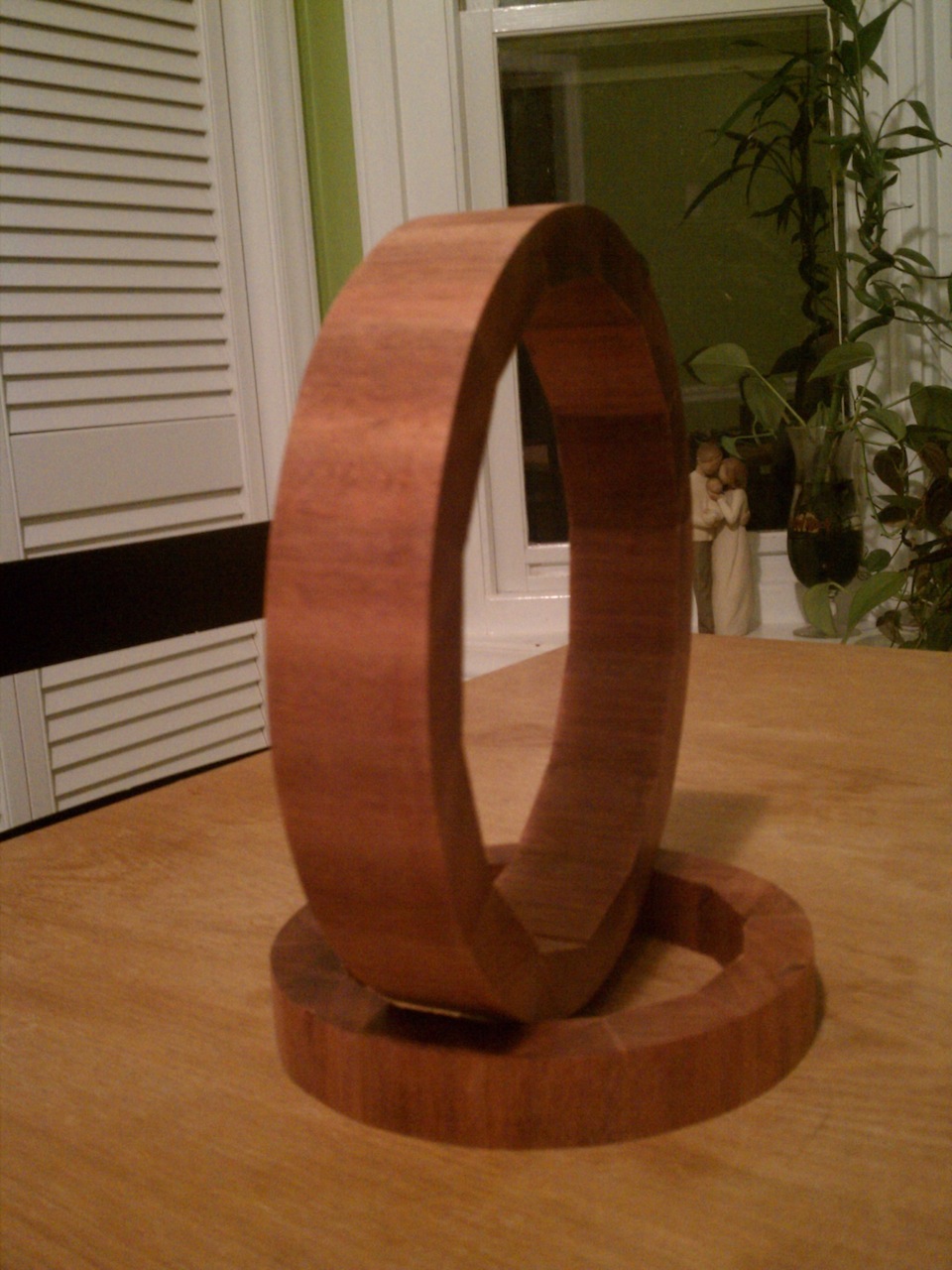 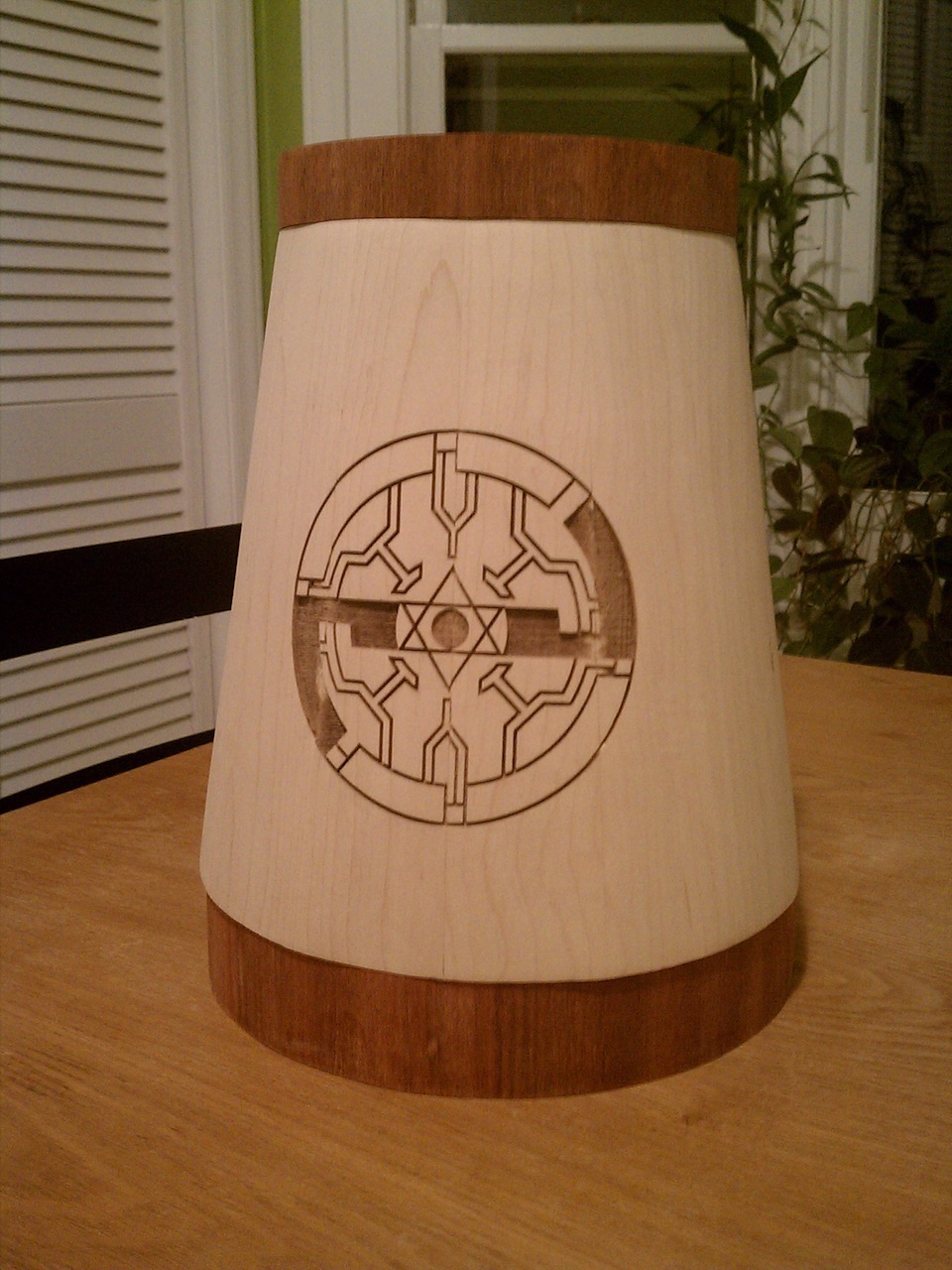 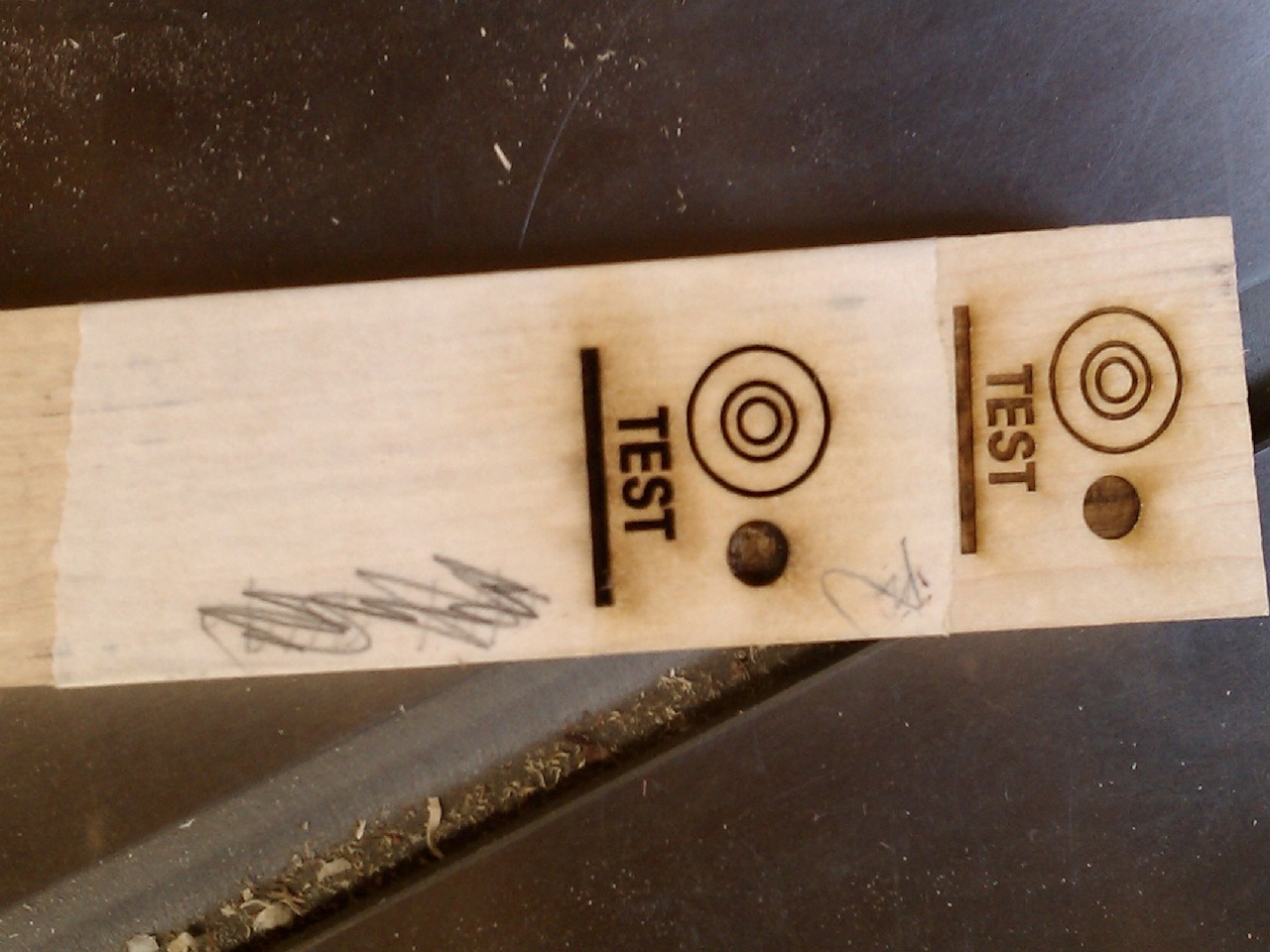 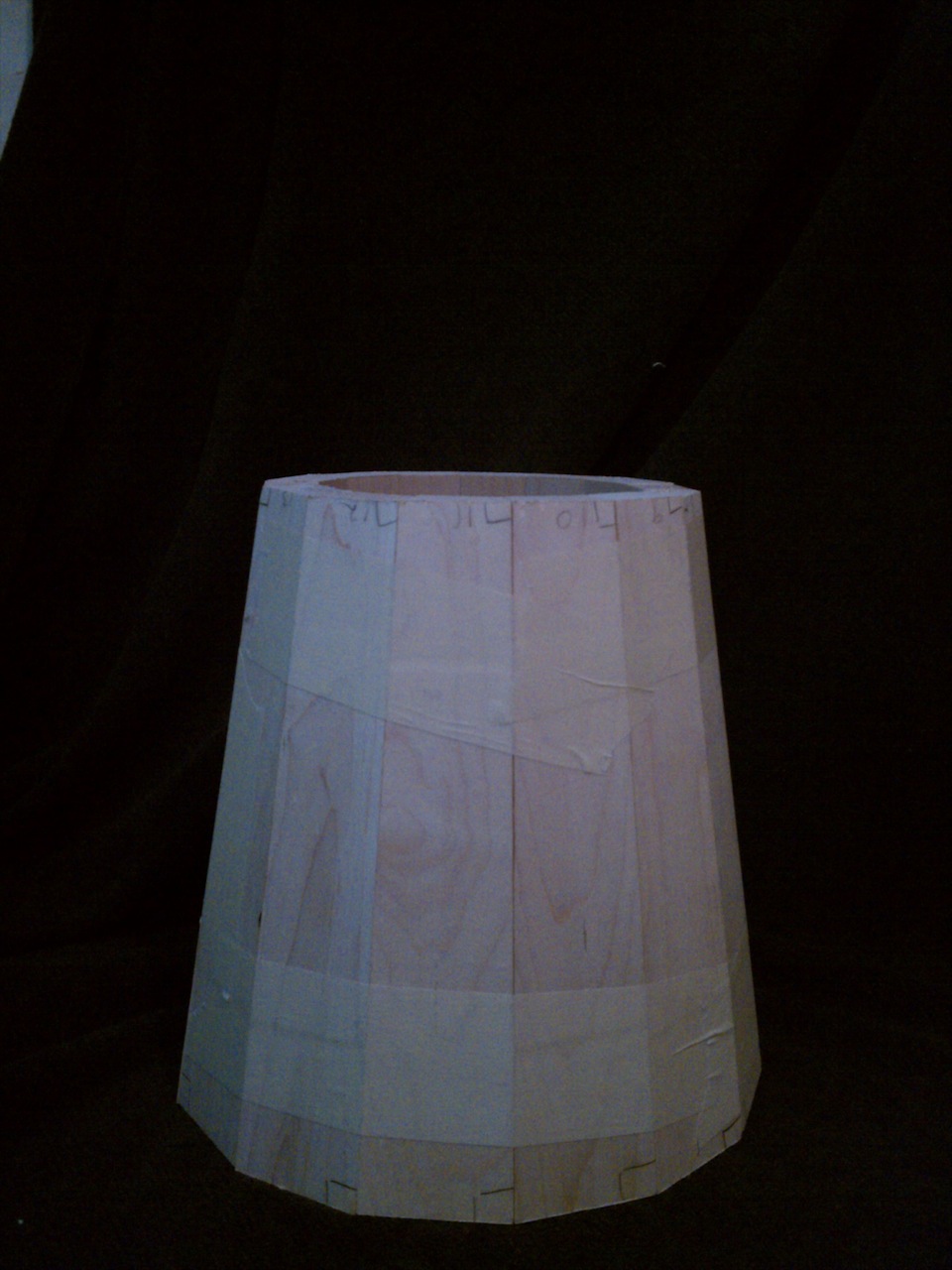 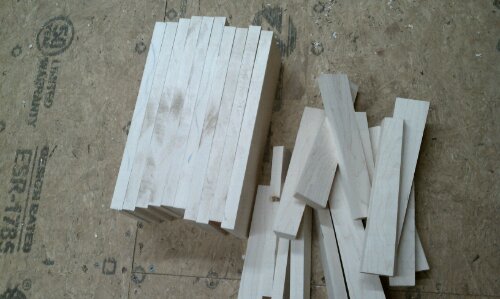 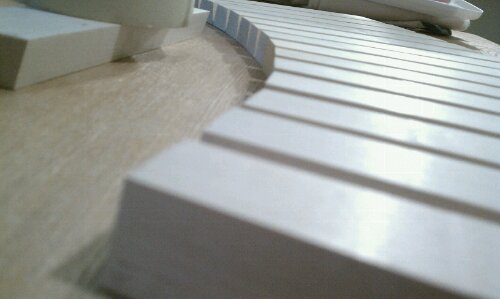 This was a particularly interesting djembe build for me. There were some steps involved that I had not done before and the project as a whole was pretty involved.
This djembe is 5 separate sections and each section is made up of a number of staves. I used Hard Maple as the main wood and Bloodwood as an accent. The customer wanted a big drum with a lot of bass so I made the bowl of the drum a bit over-sized which really enhances the bass frequencies.

The customer also wanted his band’s logo on the drum, and I had just finished up a friend’s drum using some Inlace (resin inlay) for accent. The hardest part of that process was mixing the right colors to match the Bloodwood, but I finally got something I was happy with…now if only I can remember what I did! It stunk and was a pain to work with. Luckily I have a good respirator with the cartridges so I couldn’t smell it. I made a mess mixing the stuff and getting the right color, but the final process was worth it. I also found out when sanding, that this stuff doesn’t like heat. A little too much time and it would start to curl and pop out of the recess. I ended up picking some out and reapplying more resin. The instructions suggest a minimum of 1/8″ deep and 1/8″ wide, but I had some sections that were closer to 1/16 deep and wide, but it held the detail fine.

There is a lot of math that goes into building a drum like this, and to make sure your slats glue up tight, your angles have to be right on. I know some guys who like to use the table saw to cut the bevel angle. I’ve got a 3hp sawstop and still won’t use it to cut the bevel. I get a much more accurate cut by throwing a tilt box on the jointer fence and making my bevel there. Each section has a different number of staves (slats) so the angle is different for each. Each section is connected by dowels to the next, and the final djembe drum feels super solid.

BTW, I have an excel spreadsheet with all the formulas on it, so I just plug in what size I want the drum and the computer does the rest. I’d love to learn SketchUp better and virtually build the drums…I just haven’t taken the time to learn it yet.

The glue-up is tricky with a cylinder and even more so for a cone shape. I’ve seen it done with all sorts of jigs and rigs, the most intricate being a custom wheel with screws that would finely adjust each stave in place in a perfect circle…WOW…I can’t imagine using that thing. As long as your staves are the same size and the bevel is the same angle, you’ve got a round form. I lay it out flat on the ground with the exterior facing up, tape it up with 2″ strong tape, flip it and roll it…ta-da! :) I use to use ratchet clamps like in hardware stores, but now use large SS wormgear band claps and it gives me much more even pressure.

No lathe on this project. I used a plane to knock down the edges and a belt sander to sand it smooth. Then I hit it with different grits on the random orbit up to about 400. I do anything over 400 by hand.

One issue I ran into with sanding was the Bloodwood ‘leaked’ into the maple. I just made sure that I sanded the maple sections last and that seemed to clean up the problem.

Heading the drum with African goatskin and tuning it properly is a huge post all on it’s own, and not really relevant to woodworking…but if anyone is interested, I’ve written an article with lots of detail and photos on how to head up a djembe or ashiko that I am happy to share. The full write up and photos can be found here: Rhythm House Drums – Blog

Here is a short (crappy) video I took of me playing this djembe: